Cardcaptor Sakura Movie 2: The Sealed Card (劇場版カードキャプターさくら 封印されたカード, Gekijōban Kādokyaputā Sakura Fūin Sareta Kādo?) is the second anime film, sequel and the finale to the anime television series adaptation of CLAMP's Cardcaptor Sakura. This can be considered the TV series finale, as it takes place one year after Episode 70, and even considered as the twenty-fifth episode of the third season.

It is also known as Sakura and the Sealed Card

It is then followed by the premiere of the Clear Card sequel, which is still ongoing.

The animation was produced by Madhouse, while it was directed by Morio Asaka and written by Nanase Ōkawa (Clamp's head writer). It won the Feature Film Award at the 2000 Animation Kobe. The film was released on DVD in the year 2003.

Tomoyo and an embarrassed Sakura review videos showing "Cardcaptor Sakura" in action, showcasing and capturing various Clow Cards. As the topic of Syaoran comes across, Sakura wishes to tell him in person that she loves him as well. Sakura is attending summer classes because her class is participating in a play for the Nadeshiko festival and looks at the nameless card she made in the final episode as proof of her love for Syaoran. Sakura is to play the princess and Yamazaki is to play the prince. Later that night, Sakura thinks of Syaoran as she reads the princess's confession. Meanwhile, the area where Eriol's mansion was has been turned into an amusement park, where the unknown Clow Card reveals to be a young girl hovering in the clock tower. The next day, Sakura goes with Tomoyo to visit Eriol's old house to find it has been replaced with a new amusement park. While they explore the park, Sakura feels a presence similar to that of a Clow Card. As she runs through the park trying to locate the source of the presence, she crashes into Syaoran, who has returned from Hong Kong with Meiling, for a visit to see the town's annual festival. Sakura is flustered as she still hasn't confessed her true feelings for Syaoran, despite him having done so before he left. Meiling tells Sakura that she and Syaoran cancelled their engagement because he has someone he really likes. Syaoran is aware that the visit is part of Tomoyo and Meiling's plans to give Sakura an opportunity to reply to him. He tells Tomoyo that he wanted to see Sakura but is worried that his presence will burden her into giving him a reply. Tomoyo and Meiling set Sakura and Syaoran up alone for dinner. Sakura tries to confess, but is interrupted by Kero and Touya respectively. Unbeknownst to her, some of her cards begin to disappear.

Syaoran and Meiling volunteer for the class. While the four walk around town and talk, they notice that parts of the city are disappearing. Sakura writes to Eriol and doesn't notice more of her cards disappear. After rehearsals, the four meet up with Touya and Yukito . Yukito talks with Sakura and encourages her to confess to Syaoran. She finally senses her cards disappearing and then a bridge missing. Meiling invites everyone to go to the new amusement park, where she pitches Sakura and Syaoran alone again. They notice the cards disappearing and sense Clow Reed's magical power, and follow it. Sakura and Syaoran encounter a mysterious girl who takes away more of Sakura's cards before disappearing. Later, Eriol calls Sakura and after she tells him what has happened, he explains that the girl and her presence at the park was the Sealed card, the fifty-third Clow Card, which was set free when his old house was demolished. Containing an equal amount of tremendous power as the other fifty-two cards combined, it was created to balance the positive powers of the cards with a negative one. Every time the Sealed Card steals one of the Sakura cards, it will also take something near her. Sakura will have to convert the card to a Sakura Card to restore the balance, but to do so will require that someone of the card's choosing will lose their most important feelings (due to that romantic love is the strongest and purest feeling). This means that Sakura will lose her budding love for Syaoran if she converts the Nothing Card into her own Card to join the others.

The next day, Sakura tells Syaoran all what Eriol had managed to tell her. Although both are saddened, he tells her that it cannot be helped and she runs away crying. She is comforted by Yukito who turns into Yue, who assures her that it will be alright. On the day of the festival, Sakura sense the Sealed Card at the school. When she spots it in a void circle, Sakura activates the Sleep card to try to prevent a panic. However, the sleep spell only lasts a short time as the Sealed card quickly steals the Sleep card. Yamazaki ended up hurting himself from falling to the floor and everyone asks Syaoran to take the role. During the play, Syaoran and Sakura dance and confess their feelings as the prince and princess. The stage lights explode and the ground begins to shake and the stage breaks up. A string of Sakura Cards fly away from Sakura's bag into the dark sky, and the Sealed card steals the people from the play, including Sakura's family and friends, along with huge portions of the entire city. Eventually the only two remaining are taken as well, leaving Sakura and Syaoran to rush to the amusement park to confront the card. Sakura's magic proves ineffective against the card. As his magic is not tied to the Clow Cards, Syaoran attacks the Nothing and manages to wound it, but it eventually deflects his attack and wounds him.

Sakura races up the tower after the Sealed card, but gets trapped on the stairs after void spheres leave two gaping holes on either side of her. The Sealed card tells Sakura that she is lonely and just wants her friends, the other cards, back. She doesn't understand why Sakura is getting in her way, but Sakura tells her that true friends do not push each other nor try to bind each other. The Sakura cards pull free from the Sealed Card and surround her. Shocked, the Sealed Card collapses in tears. Seeing that all of the Sakura Cards want to be friends with the Sealed Card, Sakura asks her to join with the other fifty-two Cards so that Nothing will not feel alone anymore.

The Sealed Card agrees. Sakura orders the rebirth of the Nothing card and says that she really couldn't confess to Syaoran after all. As the card appears to go to Sakura, it chooses Syaoran (who manages to make it in time) as the one who will lose their most important feelings because Sakura used too many cards at one time. Syaoran tells Sakura not to worry, because even if he has to sacrifice his love for her to save everyone, he'll just fall in love with her all over again. However, as the card attacks, The Nameless Card (which Sakura created at the end of the TV series) negates it and they combine into a brand new Sakura card, the Hope Card, which is a representation of Sakura and Syaoran's genuine romance blooming between them.

Crying and believing it's too late, but encouraged by the Hope Card, Sakura still confesses to Syaoran that she loves him and that he is the most important person to her. To her surprise, he gently replies that he loves her too, and Sakura realizes he didn't lose his intense romantic feelings for her after all. As everyone and everything begins to reappear, an overjoyed Sakura uses the Jump Card and leaps to Syaoran before the stairs return to normal with no intention to wait further, despite Syaoran's protests to keep her safe. As she leaps to embrace Syaoran, she exclaims, yet again, "I love you!"

The movie ends leaving Sakura in mid-air with their warm embrace not directly shown in the video.

However, bonus artwork released with the film (during its DVD premiere) includes a large illustrated poster of an extra ending scene showing Sakura successfully making the leap, right into Syaoran's arms, as the pair romantically hug. 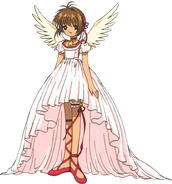 Final Battle Costume
Add a photo to this gallery

Syaoran's Final Battle Costume
Add a photo to this gallery

Containing 32 tracks of background instrumental songs and vocal tracks used within the movie, Cardcaptor Sakura Movie 2: The Sealed Card Original Soundtrack was released in Japan on August 2, 2000 by Victor Entertainment.

Madhouse also brought out several pieces of high quality artwork, postcards and illustrated poster art (including the final scene bonus poster). The Special Edition DVD featured a separate art gallery section along with a booklet and pencil boards. CLAMP also brought out an art book titled "The complete book of the animated movie Cardcaptor Sakura - The Sealed Card" in October 2000 which also featured interviews with CLAMP and the voice actors for the Cardcaptor Sakura series.

Ridwan Khan noted that "understanding the film required knowledge of Cardcaptor Sakura's second season,[1]" and Chris Beveridge cautioned that "the continuity of events was not entirely right.[2]" Beveridge felt the Kero-Chan Theatrical Event special was the best extra.[3] Allen Divers of Anime News Network felt "it was a satisfying conclusion to the series.[4]" THEM Anime felt that "the plot of the film was more substantial than the plot for the first film", and enjoyed the two story lines of Sakura's emotions and the final card.[5]

2009 Re-release (Back)
Add a photo to this gallery

Special Edition DVD Back
Add a photo to this gallery

Japanese theatrical poster
Add a photo to this gallery

Retrieved from "https://ccsakura.fandom.com/wiki/Cardcaptor_Sakura_Movie_2:_The_Sealed_Card?oldid=57924"
Community content is available under CC-BY-SA unless otherwise noted.