The story begins at night with a young girl chasing after a mysterious bouncing creature. The girl's name is Sakura Kinomoto and accompanying her is a small yellow plush like creature with little wings. She finally corners the strange bouncing creature (the Jump card) at Tokyo Tower and using the magical Windy card successfully captures it. She then uses her pink sealing staff and returns it to a similar card form. The little toy like creature floating beside her congratulates her and Sakura is happy about the capture when a loud noise abruptly interrupts her. It was all just a dream, and Sakura groggily sits up, switching the ringing alarm off beside her bed.

On the TV across her bedroom, a video is playing out loud replaying the events of her dream on the screen. The little creature is the culprit. His name is Cerberus, although Sakura affectionately calls him "Kero-chan", to his chagrin. Sakura gets dressed for school and introduces herself to the reader. She takes out the video to give back to her friend Tomoyo Daidouji, who filmed it. Sakura insists that the movie is real however, and not staged. Taking the video away irks Kero because he still wanted to see the parts with him in. Sakura then goes on to talk about Kero and introduces him.

Down stairs at the kitchen table she relates about her family: her "Unbearable brother" Touya Kinomoto, of whom she one day hopes to crush after growing taller than the telephone poles. She also introduces her affectionate father Fujitaka Kinomoto and lastly: her deceased mother, Nadeshiko Kinomoto. Sakura quickly scoffs up her breakfast and rushes off to catch up with Touya, so she can see Yukito Tsukishiro, her crush.

She arrives at school when Yukito throws her a sweet. Sakura is delighted that he gave her a gift and ogles after him when a voice comes over her shoulder and Sakura turns to find Tomoyo, who bemusedly comments what a great guy he must be to slip her a gift. Sakura returns the video and then recalls the circumstances surrounding her accidentally releasing magical items known as Clow Cards, meeting Kero and how she began her adventure as a Cardcaptor, and how she has to retrieve all the cards. Presently she only has three.

Later in gym class everything was normal; Sakura saw Yukito and he smiles at her, delighting her when a huge wind suddenly engulfs them and a gigantic bird appears across the sky. Sakura stares up and she ponders if it could be a Clow Card. 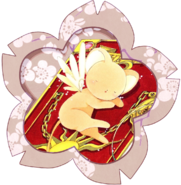 The Windy
(First Use)