Start a Wiki
Chapter 5 is the fifth chapter of the manga Cardcaptor Sakura, forming part of Volume 1.

Tomoyo receives a message from Sakura saying that her mother is in the pond. The revelation stuns Tomoyo because Sakura's mother had died seven years ago. Kero tries jumping into the water, but is abruptly thrown back by some strong invisible force. He shoots back and Tomoyo catches him.

Tomoyo then climbs halfway over the railing, ready to jump in and save Sakura herself, when ‘someone’ suddenly intervenes and jumps in before her. Sakura is still hugging the woman, but the grip is slowly becoming painful. She's running out of air and slowly losing conscious. The woman vanishes and Sakura starts to drift to the bottom of the pond. Her eyes feel heavy and are closing fast. A hand suddenly reaches down through the murky water to grasp hers, just as Sakura blacks out.

She wakes up later, and blinks. She's no longer under water. She sits up, and stares around wildly at her unfamiliar surroundings. Yukito walks in with a tray and informs her she is at his house. She realizes he was the one who pulled her out of the water. She confides to him that she saw her mother in the pond; but he tells her that if it really was her mother would she have deliberately put her in danger?

Touya arrives to pick Sakura up. He shoulders a sleeping Sakura on his back as he and Yukito converse. He feels guilty and confesses to Yukito that when he and Sakura were younger he kept saying he saw ghosts and spirits and scaring her with it and that was why Sakura is so afraid of them.

The next morning Tomoyo and Kero visit Sakura in her room. Tomoyo is holding a picnic basket. Kero jumps out of it with a flower in his mouth. He floats over to Sakura in her bed and apologizes to her for not being able to help. Sakura takes the flower and sniffs it.

That night Sakura returns to the pond dressed in another of Tomoyo's costumes. Nadeshiko appears once again from the pond, but now everyone can see it. Sakura uses The Fly to get closer but falls in to the water with the woman. Nadeshiko begins to drown her.

Sakura s is distraught: she doesn't understand and why her mother is acting this way and for a fleeting moment she thinks that she wants her to join her in the afterlife. Yukito's words suddenly cut through her mind clear as day: if this really was her mother would she be deliberately putting her in danger like this? Sakura is resolute and declares the woman is not her mother.

Something unusual then begins to happen. The image of her mother begins to shift and flicker and a kaleidoscopic pattern is seen running through it. Kero says that this pattern corresponds to a Clow Card: The Illusion. Watery is invoked to exit the pond and catch the illusion.

The next morning Sakura is getting ready for school. Touya, who is sitting at the dinner table eating his breakfast, looks up and is startled by what he sees: the real Nadeshiko, with angel wings on her back, looming over Sakura with an affectionate smile on her face. Nadeshiko tells Touya she was worried about Sakura, but now it seems to be just fine. 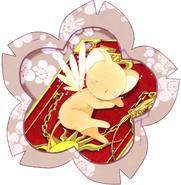 Retrieved from "https://ccsakura.fandom.com/wiki/Chapter_5?oldid=46785"
Community content is available under CC-BY-SA unless otherwise noted.