The Grey Star Costume is worn by Sakura when she has to free Syaoran from the invisible threads using the Sword card. This costume was designed by Tomoyo and is based on the same style as the episode 50 costume. 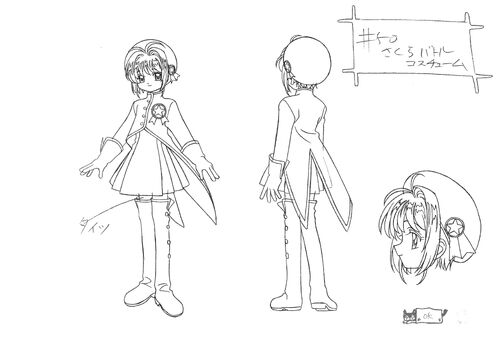 The boots are thigh high and match well with the rest of the costume. They are grey with black rims on the top of the boots. The sides of the boots have 4 black buttons and the top part of the boot is split. The hat is cylindrical and is grey. On one side of the hat, there is a ribbon with a yellow star stamp on it.

In the manga, the hat, jacket, and boots are red with black edging and buttons and the skirt is red and black instead of white and grey.

In the original manga by CLAMP, the costume is displayed as red and black, instead of grey and grey-blue. The star brooch has a light-pink background to it and features stripped ribbons instead of the solid grey-black.

Original manga colors
Add a photo to this gallery

Sakura wearing the costume in the 2001 v2 calendar.
Add a photo to this gallery

Retrieved from "https://ccsakura.fandom.com/wiki/Grey_Star_Costume?oldid=46145"
Community content is available under CC-BY-SA unless otherwise noted.