Hail (Kanji: 氷雹, Katakana: ヘイル, Romanji: Heiru) is one of the Clear Cards that was captured after the mysterious clearing of the Sakura Cards. It's an anime-exclusive card.

On its card, it appears as several pieces of hail falling from the sky, with a few being nearly spiky. It's main body appears as a single spiky ice crystal.

Hail Magic: It has the ability to create a hail storm in a given area. With the correct force and angle, its ice could damage objects, even buildings. 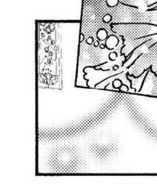 Hail in Chapter 39 of the Clear Card manga