The booklet of the album also featured a musical score for the second song "Shiawase no Mahou", performed by Sakura Tange. The Drama CD was released in Japan through Kodansha Comics on August 7th, 1997. 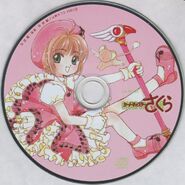