The Pink Hope costume is only worn in Cardcaptor Sakura Movie 2: The Sealed Card.

The costume, was designed by Tomoyo. It's design coincides with the Green Hope suit worn by Syaoran.

It consists of a pink dress with fuchsia traits on the chest, shoulders, neck, gloves and the second skirt. The dress is divided into two parts from the waist down: the first is the long tail coats trailing down behind Sakura's legs and around the front is like a skirt, with another smaller fuchsia colored one beneath. On the back are the designs of a pair of wings.

The neck has a pair of golden wings drawn on and the chest and shoulders are adorned with gold buttons. Sakura wears a short pink gloves that go halfway up the arms and the suit has yellow lien and edges where the colors are separated. The boots are pink and fuchsia with folds which have drawn wings on each with yellow borders and accessories include a pink hat with a prominent pink stripe and white wing in the middle of the cap. 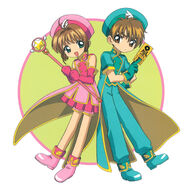 Retrieved from "https://ccsakura.fandom.com/wiki/Pink_Hope_Costume?oldid=46119"
Community content is available under CC-BY-SA unless otherwise noted.