Reversal (Kanji: 逆転, Katakana: リバーサル, Romanji: Ribāsaru) is one of the Clear Cards that was captured after the mysterious clearing of the Sakura Cards. It's an anime-exclusive card.

In its card form, Reversal appears a black crystal mirrored with a white crystal, both are over backgrounds of opposite color with a diagonal line that separates the two. Outside of its card it appears as a green misty wind.

Reversal Magic: It has the ability to reverse all the things in an upside-down manner. However it can not reverse airborne objects that are capable of flight. 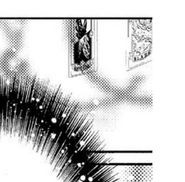 Reversal in Chapter 39 of the Clear Card manga