Start a Wiki
Sakura's First Attempt As A Thief (さくらの怪盗初挑戦!?, Sakura no Kaitō Hatsu Chōsen!?) is the 7th episode of the first series of Cardcaptor Sakura. The Cardcaptors title for this episode is "The Mysterious Painting".

At an art museum trip, Sakura and Tomoyo are drawing a sculpture. Sakura suddenly screams scaring Tomoyo who covered her ears and also scaring Mr.Terada who tells her he just said to be quiet. She apologizes and glares at her drawing book, turning out that her drawing of Kero was messed up by him.

Naoko, and Chiharu wave at her from the courtyard. Tomoyo says she wants to finish drawing, so as she tries to get to the courtyard, Sakura witnesses a boy attempting to change a painting and was stopped by the guard. During the commotion, she couldn't hear anything and Cerberus was sure it was the Silent card.

Silent can't stand loud noises so the museum would be the perfect place for the card to hide. The noises caused by the boy caused it to reveal itself in distress at the noise. Sakura sneaks out of the house at night and into the museum where they meet the boy from earlier also sneaking in. The boy, Yuuki Tachibana , explains the painting is by his deceased father and his mission to restore the painting which a Clow Card has covered up.

Every time Sakura attempts to capture the card, the Silent card transports the group outside. Using the Shadow card after Yuuki is been captured by the guard who stopped him earlier and pushes the guard onto the floor allowing Yuuki to flee, Sakura is able to silently capture Silent from a distance restoring the painting and discovering Yuuki is actually a girl. The guard returns where he dropped his flashlight after he get pushed by the shadow Sakura earlier and looks at the painting seeing the painting is back to normal. He screams and runs down the hallway panicking that the painting is haunted. After saying goodbye to Yuuki; Sakura, Kero and Tomoyo left home. A stranger, dressed in an long, green robes, appears on the top of the museum tower at the end of the episode and quietly mutters that he senses a Clow Card. 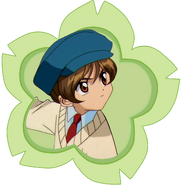 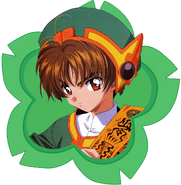 Syaoran Li (cameo)
Add a photo to this gallery

The Shadow (First Use)
Add a photo to this gallery

The Silent
Add a photo to this gallery

Kero's Bat costume (Debut)
Add a photo to this gallery

Syaoran's Battle Costume (Cameo)
Add a photo to this gallery

(Sakura and Tomoyo fall over)

Retrieved from "https://ccsakura.fandom.com/wiki/Sakura%27s_First_Attempt_As_A_Thief?oldid=45499"
Community content is available under CC-BY-SA unless otherwise noted.