Sakura's Wonderful Friend (さくらのすてきなお友達, Sakura no Suteki na Otomodachi) is the 2nd episode of the first series of Cardcaptor Sakura. The Cardcaptors title for this episode is "Partners in Crime".

Sakura wakes up thinking the night before was a dream. Sakura screams when she sees Kero, thinking he was a squirrel. Sakura went down to have breakfast.

While ready to eat, Touya makes fun of Sakura; telling her he only had to wake her up once. She shouts at him saying that someone woke her up. Realizing her mistake, she said it was nothing. She brings Kero some cookies, and says he can turn on the TV when everyone leaves. She realizes how late she is and rushes to school.

Sakura is surprised that she arrives first. Then Tomoyo arrives and shows her a video showing Sakura and Kero's shadows on the moon. Sakura looks at the video, nervous that Tomoyo will find out that she has magical powers. Tomoyo zooms in on the video confirming that it was Sakura in the video. Sakura screams causing Kero to emerge from her school bag thinking there's a Clow Card attacking nearby, and sees Tomoyo staring at him surprised, then looks at the video and finds out that it was Sakura in the video. Tomoyo formally meets Cerberus after she discovers Sakura's secret and gets a full explanation of the lost Clow Cards and Sakura's designation as Cardcaptor after she filmed her and Kero last night while flying in the sky with the Fly card they have captured. Cerberus gets the nickname "Kero-chan" that will stick for the rest of the series. The next day, the students find the school's desks and equipment in a pile outside. They then rush to the classroom and see the desks over turned, and groan because they will have to clean it up. Tomoyo arrives and asks Sakura if it could be the work of a Clow card. Kero believes it was the work of the card and forces Sakura to go to school at night where she confronts The Shadow. Using The Windy card's binding ability, Sakura is able to capture the Shadow card. Sakura finally accepts her role as a Cardcaptor, and thanks Tomoyo for her support. 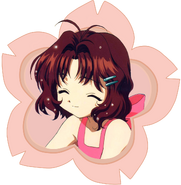 Difference between the manga and episode

Retrieved from "https://ccsakura.fandom.com/wiki/Sakura%27s_Wonderful_Friend?oldid=44599"
Community content is available under CC-BY-SA unless otherwise noted.