Cardcaptor Sakura: The Movie (劇場版カードキャプターさくら, Gekijōban Kādokyaputā Sakura?) is a Japanese anime film directed by Morio Asaka and produced by Madhouse and Bandai Visual. The film is based on the anime TV series adaptation of CLAMP's Cardcaptor Sakura manga series. Written by Nanase Ohkawa, Clamp's head writer, it was released in Japanese theatres on August 21, 1999. It was the Feature Film Award at the 1999 Animation Kobe.[1] The film can also be titled, Cardcaptor Sakura- the Movie: Sakura Goes to Hong Kong.

Set between the first and second seasons of the television series, after "Sakura's Wonderful Christmas" and before "Sakura and the Snowy New School Term. "

The film shows Sakura and her friends going to Hong Kong where they encounter a vengeful spirit of a very strong sorceress who was hurt by Clow Reed in the past.

A second film, Cardcaptor Sakura Movie 2: The Sealed Card, followed in 2000, which is considered the actual series finale of the original anime, as opposed to Episode 70.

The film begins with Sakura and Syaoran capturing the Arrow card, with Tomoyo videotaping the event and Kero and Meiling cheering for the two. Later that night, Sakura has a strange dream of being surrounded by water and of a strange woman. The next day, everyone receives their report cards, which all but Meiling got good grades. Syaoran is nervous of his grades because of his mother, but is relieved that he got decent grades to show her. Sakura and Tomoyo go shopping and visit Maki's shop, Twin Bells, where Sakura plays a lotto and wins a trip to Hong Kong. Sakura invites Tomoyo to go with her, and wants her father to go too. However, because of his job, he is unable to and that leaves Touya, much to her dismay. But she is cheered up when Yukito decides to go as well.

Along with Kero, they fly to Hong Kong. Once there, Sakura feels a strange presence involving water. She is separated from her friends and hypnotized into nearly falling into water until Syaoran suddenly appears and snaps her out of it. Meanwhile, Tomoyo runs into Meiling, who explains that she and Syaoran have returned to Hong Kong for the spring break. She offers them to come back to the Li mansion so Sakura can change clothes after tripping in the water. There, they meet Syaoran's four older sisters and his mother, Yelan Li, who takes an immediate interest in Sakura and invites them to sleep over, much to Syaoran's chagrin. Sakura is later warned, by Yelan's elemental diving spell, that a powerful magical force is following Sakura, and has thus compelled her to Hong Kong.

Syaoran is forced by his mother to accompany Sakura and the others around the city. However, Sakura encounters a woman with the same magical presence she has been feeling and uses water as her weapon. One by one, the spirit captures Touya, Yukito, Tomoyo, and Meiling. Sakura and Syaoran team up to save their friends. While Syaoran fights the woman, Sakura frees Tomoyo. However Syaoran is defeated and captured, and he orders Sakura to run and save everyone. Coming back into the room Sakura tries and fails to find the book that transported them to the other dimension. Now back in the hotel room Kero tells Sakura and Tomoyo a tale of a water-based fortuneteller (a hydromancer) in Hong Kong who had a romance and then fierce rivalry with Clow Reed after he accidentally put her out of business due to his predictions being more accurate than hers, and now she lingers in another dimension waiting for Clow Reed to release her.

When trying to figure out how to go back to the woman to save their friends, Sakura remembers the well and realizes that that's the place to go. Arriving at the well the three find out there is a barrier around the well house, when trying to figure out how to get in they hear footsteps coming toward them. Syaoran's mother shows up and splits the barrier for Sakura. Telling Tomoyo to stay, Sakura goes in to the well alone. While going through, Kero tells Sakura to think of where she wants to go. She thinks "I want to go to where my friends are", she arrives in a room. The birds from before are there and flies away. Sakura runs and arrives at a door. she opens the door to find water filled up to the top of the roof. She swims to the top to once again confront the fortune teller.

The woman demands to know where Clow Reed is, and that she has been using her magic to summon him and only Sakura appeared. Sakura tells the spirit that Clow Reed has been dead for many years, which the spirit refuses to believe. The woman attacks Sakura and demands the truth, and sadly saying she has been waiting for him for a long time. Sakura realizes that the woman in fact loved Clow Reed after he gave her a hair flower pendant, and finally the woman believes that Clow Reed is dead. With that, the woman dissolves into water, leaving only the pendant she has cherished, which dissolves a minute after she's gone. Everyone is free of their prison and everything returns to normal.

The film concludes with everyone preparing to board a ferry and are about to return to Japan. Everyone does not remember anything, which the three says that that's a good thing. But the movie ends with Sakura saying that she has a feeling she has not seen the last of Hong Kong.

Return to your power confined

The same production staff that produced the anime TV series adaptation. The character designs were by DVD in Japan by Bandai Visual on February 25, who based the designs on CLAMP's original illustrations. The art director for the film was Katsufumi Hariu, and there were three animation directors: Hitoshi Ueda, Kumiko Takahashi and Kunihiko Sakurai. The music was produced by Takayuki Negishi, with Masafumi Mima as the sound director.

Movie Phamlet (Front)
Add a photo to this gallery 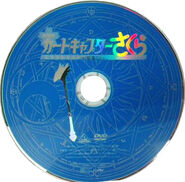 DVD Disc
Add a photo to this gallery

English Special Edition DVD Back
Add a photo to this gallery

Cardcaptor Sakura: The Movie was released on VHS, LD and DVD in Japan by Bandai Visual on February 25, 2000.[2][3] The film was re-released on November 25, 2000 on VHS,[4] May 25, 2007 on DVD in a two-disc set with Cardcaptor Sakura Movie 2: The Sealed Card,[5] and on December 22, 2009 on DVD.[6] Nelvana released an English dubbed version of the film, retaining the same name and story changes as its main Cardcaptors dub. As with the television series, Pioneer Entertainment released the film without editing, including the original Japanese audio and English subtitles. Both the edited and unedited versions were released on VHS and DVD on March 26, 2002.[7][8] 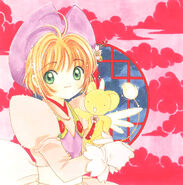 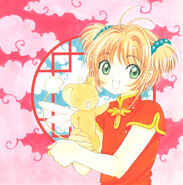 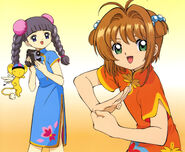 Retrieved from "https://ccsakura.fandom.com/wiki/Sakura_Goes_to_Hong_Kong?oldid=54047"
Community content is available under CC-BY-SA unless otherwise noted.