Syaoran Li captures his second Clow Card after defeating the Storm card. Tension develops between Kero and Sakura Kinomoto over the Syaoran issue which builds into a fight the next day after Kero makes a mess after building a room inside Sakura's desk drawer, enraging Sakura and walks downstairs angrily.

Touya makes fun of her but he yelps seeing Sakura glaring at him. While Sakura is at school, Kero eats liquor filled chocolate and wanders out the window, drunk before passing out on a couch. The next day, he awakens to find himself with a young girl named Akane who lives alone with her mother.

Unable to escape, Kero secretly contacts the worried Sakura by fax. Akane wishes she could fly to see her father in heaven and the Float card makes her dreams come true. Despite Kero's best efforts, he's too slow to catch it and is able to fall until Sakura comes to his rescue and saves Akane by sealing the Float Card away. But a wind prevents Sakura from getting close to Akane and as a last-minute plan, Sakura later uses the Wood Card to stop Akane from falling to her death.

As a way of making amends, Sakura redesigns her bottom desk drawer to become Kero's bedroom from now on. However the bed which Sakura made broke leading to their fight again. 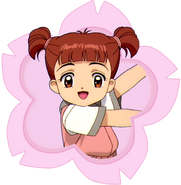 Akane
Add a photo to this gallery

The Float
Add a photo to this gallery

Storm Witch Costume (Debut)
Add a photo to this gallery

Retrieved from "https://ccsakura.fandom.com/wiki/Sakura_and_Kero%27s_Big_Fight?oldid=43196"
Community content is available under CC-BY-SA unless otherwise noted.