Sakura and the Final Clow Card (さくらと最後のクロウカード, Sakura to Saigo no Kurou Kaado) is the 45th episode of Cardcaptor Sakura. The Cardcaptors title for this episode is "The Last Card, Part 2".

The final Clow Card has finally revealed itself as The Earthy. Sakura uses the Sleep card to put the entire town to sleep. While Syaoran watches everybody, Sakura heads off to fight her toughest battle yet, the Earthy Card. Earthy is one of the elemental cards and will prove to be her biggest test yet. After struggling for a while, Kero helps her think of a combo that allows her to seal the final Clow Card. Following the capture, Kero assumes his true form now that his power is fully restored. That night at the temple, there is a short celebration about the collection of the last Clow Card. Sakura asks Syaoran who Yue is, and he explains that both Kero and Yue are the Guardians of the Clow Cards. Cerberus is the 'Selector', representing the Sun, and appearing on the front of the Book of Clow and Yue is the 'Judge', representing the Moon and appearing on the back. Sakura claims there has never been a moon on the back, and Syaoran wonders if that means Yue has already taken material form like Kero. Tomoyo wonders out loud, who will be the owner of the Clow Cards since both Syaoran and Sakura have Clow Cards. Kero replies that they will know when he (Yue) shows up. Sakura signs the last Clow Card. All of a sudden, a mystical energy surrounds them and Yukito, who is still asleep, and he suddenly transforms into the second guardian of the Clow Cards, Yue.

A confused Sakura asks for an explanation and Kero and Miss Mizuki explain that Yukito and Yue are one in the same and her friend is just the second guardian's false form. Just as with Kero, Yue lost much of his magic when the cards were released but he was instinctively near the Cardcaptor the entire time just as Dark and Light forewarned. Sakura is shocked and despite her best attempts, it's clear that Yue and Yukito are two different sides of a coin as he speaks to and regards Sakura coldly. Kero is confident however that Sakura will pass the test of final judgment and sought out Yue.

It is time for the Final Judgment, the final contest to see who will be the next master of the Clow Cards. Syaoran is allowed to go since he also possesses the Clow Cards, but Yue easily beats him with superior magic and when Syaoran makes the mistake of using Time, a card under Yue, he turns the card's power on Syaoran. Now it's Sakura's turn to face Yue. 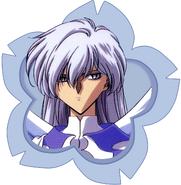 Yue
Add a photo to this gallery

The Earthy (Debut)
Add a photo to this gallery

The Time
Add a photo to this gallery

The Earthy
Add a photo to this gallery

Pink Judgement Cape Costume
Add a photo to this gallery

Retrieved from "https://ccsakura.fandom.com/wiki/Sakura_and_the_Final_Clow_Card?oldid=42331"
Community content is available under CC-BY-SA unless otherwise noted.