Sakura and the Final Judgment (さくらと最後の審判, Sakura to Saigo no Shinpan) is the forty-sixth episode of Cardcaptor Sakura. This is the second-season finale. The Cardcaptors title for this episode is "The Final Judgment".

The Final Judgment begins, but Sakura refuses to fight Yue because he is the other half of Yukito. After receiving many attacks and blows from Yue, Sakura tries to think of a way to fight Yue without hurting him. She tries to think of a Card that won't hurt him, and thinks of the Wood Card. Since it's already under Yue's jurisdiction, he can use it against her and does so.

When Sakura learns that if she fails the Final Judgment, all the feelings everyone has for the person they love the most will be forgotten, she finds the strength to try to break through the power of the Wood card. Suddenly, Sakura wakes up to the sound of her alarm clock, thinking the Final Judgment was a dream. She gets ready for school and goes downstairs. She notices that the picture of her mother is not on the table that morning, and that everyone seemed to forget their feelings for the person they love the most. Sakura goes to the shrine and searches the place to learn that no one is there. The Song Card begins singing and figures of the people Sakura cares about most appear beside her. Sakura then appears in an area surrounded by cherry blossom trees, where Yukito stands by one, his back toward Sakura. Sakura awakens from her dream, and breaks through the Wood Card. Ms. Mizuki explains that her bell was created by Clow Reed to give Sakura another chance. Sakura releases the seals, and her wand transforms. Sakura uses the Windy to trap Yue without hurting him. Sakura tells Yue that she thinks Yue loved Clow Reed a lot, and that forgetting about the person you love would be a very sad thing. She also tells him that she may not have magic as powerful as Clow Reed, but she will try her best, and wants to become friends with Yue. Yue completes the Final Judgment and acknowledges Sakura as his and Kero’s new master. Sakura meets Clow Reed and thanks Sakura as well as telling that her powers is not of the Sun or Moon, but the Stars. 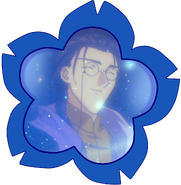 Clow Reed
Add a photo to this gallery

The Windy
Add a photo to this gallery

Pink Judgement Cape Costume
Add a photo to this gallery

Retrieved from "https://ccsakura.fandom.com/wiki/Sakura_and_the_Final_Judgment?oldid=44480"
Community content is available under CC-BY-SA unless otherwise noted.