The Fly (Kanji: 翔, Katakana: フライ, Romanji: furai) is a Clow Card with the power to grant its user the ability of flight. in the anime and is also part of the original nineteen cards from the manga series. It is under The Windy and under the power of the Moon, Yue, and Eastern Magic.

Its Clear Card counterpart is "Flight".

Fly appears as a gargantuan, pale blue bird with a long neck and legs, resembling a crane.

In the manga, Fly appears as giant due to it lashing out because of its injury. When it was comforted by Sakura, it shrunk to a smaller, infantile size.

As a Sakura Card in the manga, a star appears on its forehead and chest, and its eyes are somewhat more shapely.

In the Anime, The Fly appears somewhat chaotic, like some other cards. But in the manga, the Fly as described as having a quiet temperament, like Windy, only acting destructive due to its injury.

Wings: Fly mainly grants the ability of flight. Initially it used the wings of Sakura's Wand as a base. When it was transformed, to fit Sakura's needs, the wings now emerge from her back.

In the anime, the Fly is captured via the Windy. When the seal on the Book of Clow Cards broke and the cards escaped, the Fly is the very first Clow Card to show up. On the night when Cerberus teaches Sakura how to use the sealing wand, Fly begins to soar around town, causing trouble. Sakura experiences a little trouble, but she manages to bind Fly with Windy, the only card she has in her possession, and capture it.[1]

However, in the manga, the Windy's powers are ineffective towards the Fly. Cerberus says it's because the Fly is a card based on Windy's magic. Failing her first attempt to capture the Fly, Sakura returns home. That night, Fly comes to Sakura in a dream in which The Fly was badly injured.

After her dream, Sakura takes her second attempt to capture the Fly. There, Sakura realizes that her dream was true, and notices that The Fly isn't an aggressive card, but was scared because of its wound. Sakura uses The Jump, to reach The Fly, and hugs it to calm it down. Fly then comes to Sakura willingly.[2]

Fly is one of Sakura's most often used card as she uses it as a method of escape or a type of transportation. It is transformed into a Sakura Card in Episode 51 of the anime/Volume 8 (Chapter 32) of the manga. Eriol Hiiragizawa enchanted a teddy bear and expanded it to great heights to terrorize Yue which resulted in Sakura needing to use both the Fly and Sword at the same time to defeat it. At first, Sakura thought it was impossible because both Fly and Sword make use of the wand. However, Sakura asks the Fly card to help her find a way to defeat the bear. When she uses Fly, its wings, which originally sprouted from her wand, appear instead on Sakura's back. This form gives her a greater flexibility with her magic, as she can now use the Fly in combination with any of her other cards.[3]

Fly, like the other Sakura Cards, turned "clear" (blank) and are rendered powerless.

It is later revealed that the Cards were with Syaoran, who knew that Sakura's magical powers had grown enormously and that this could be detrimental to her. The Cards, moved by their love for Sakura and their desire to protect her, left with Syaoran through a spell arranged by his mother to prevent Sakura's powers from growing further while creating the Clear Cards.

Fly appear along with the other Cards at Syaoran's house explaining to Cerberus and Yue the reasons for their departure. Fly then helps Syaoran fly to where Sakura was in trouble. Later they all appear in front of Sakura to explain that they wanted to help Syaoran protect her.

Appearances in Other Media

In the second movie, Fly is one of the remaining five cards that Sakura has in her possession, and the third one that she uses against The Nothing. Sakura uses Fly to chase the Nothing around the amusement park, but when she and the Nothing directly confronts each other, the Nothing easily steals Fly from Sakura, leaving Sakura with only two cards left - The Shield and The Nameless Card.[4]

The Fly also appears in the Tsubasa: Reservoir Chronicle manga, during the Rekord arc, being ridden by Miyuki-chan (from Miyuki-chan in Wonderland) using Sakura's first staff.

The Fly being used 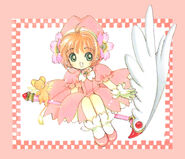 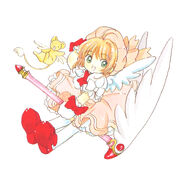 Syaoran using The Fly Card
Add a photo to this gallery

Retrieved from "https://ccsakura.fandom.com/wiki/The_Fly?oldid=56503"
Community content is available under CC-BY-SA unless otherwise noted.