The Shield (Kanji: 盾, Katakana: シールド, Romanji: Shīrudo) is a Clow Cards with the power to create magical barriers and force fields. It is under The Earthy and under the power of the Sun, Cerberus, and Western Magic

It is also one of the original nineteen cards from both of the manga.

When guarding an object, Shield appears as a blue-white-green sphere or dome. In its real form, it resembles a single winged shield with a red jewel on both sides. In its card form, The Shield is restrained by several chains.

As a Sakura card in the manga, Shield changes into an entirely winged shape with a star in the center of its jewel.

Shield has a relatively goodnatured personality, existing to fulfill its purpose of protecting precious objects and things people hold close.

Shield Magic: Shield is able to construct a powerful barrier to protect whomever it's master wishes, it can only be penetrated by powerful enough magical force.

Role in the Animated Series

It is first seen in Episode 11 of the anime (and manga volume 3) protecting a box containing keepsakes belonging to the Daidouji family, even to the point of keeping Tomoyo and Sonomi from opening the box at all. However, The Sword was able to penetrate through The Shield, thus enabling Sakura to capture Shield. This is the same as in the manga, as Kero states that the card likes to protect things that are most important to somebody. Inside the box is the wedding bouquet that Sakura's mother carried on her wedding day and the first gift Tomoyo ever received from Sakura, a rabbit eraser.

Shield is transformed in Episode 58. Sakura used it to shut out the magic that was preventing Cerberus and Yue from returning to their disguises.

Sakura also uses Shield in the Season 2 finale to block one of Eriol's attacks, but it plays no further role in the finale after that, except for continuing to protect Syaoran and the unconscious Touya and Tomoyo.[1]

In Volume 11 of the manga, Shield's use to block Eriol's attack during his final confrontation with Sakura and the moment of its transformation.

The Shield, like the other Sakura Cards, turned "clear" (blank) and are rendered "completely powerless".

It is later revealed that the Cards were with Syaoran, who knew that Sakura's magical powers have begun to grow enormously in strength and increasingly chaotic ;and that this could be detrimental to her. The Cards, moved by their love for Sakura and their desire to protect her, left with Syaoran through a spell arranged by his mother to prevent Sakura's powers from growing further while creating the Clear Cards.

Syaoran used "the Shield" during a confrontation with Yuna D. Kaito.

In the second movie, Sakura used the Shield in the beginning of the movie to block an attack from an ice monster made by The Create. It is the final card Sakura used against The Nothing, (The Nameless was not absorbed because it was not created by Clow). Sakura used it to protect herself from the Nothing's powers. While the Nothing was able to penetrate Shield, she was not able to erase the part of Sakura's body it had engulfed. Shield was then captured by the Nothing shortly afterwards.

The true form of the Shield

The Shield's transformed appearance (Manga only) 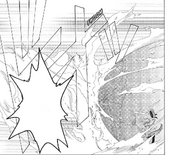 The Shield card in the anime 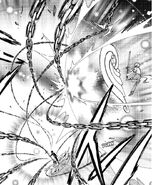