The Watery (Kanji: 水, Katakana: ウォータリー, Romanji: Uōtarī) is a Clow Card with the power to manipulate and control water. It is one of the four elemental cards, and as such it is one of the most powerful. Watery falls under the power of the Moon, Yue and under Eastern Magic.

It is also one of the original nineteen cards from the manga series.

Its Clear Card counterpart is "Aqua"

In Episode 3 of the anime, Watery makes a home in an aquarium where it attacked the animals and staff members, and later Sakura, too. In the manga (Volume 1), Watery first appears in school's swimming pool, where it tried to drown a number of students. In both cases, Sakura Kinomoto manages to capture Watery by luring it into a walk-in freezer with Windy and locking it in until it froze.

In the anime, Windy is also used to accelerate the freezing process, capturing Watery faster.[1]

Watery also teamed with Windy to help take down the Firey Card which enabled Sakura to capture it at last.

Sakura uses Watery in an attempt to defeat Earthy in Episode 45, but Earthy does not seem to be affected by Watery's powers.[2]

In The Sealed Card movie, Sakura uses the Watery at the beginning of the movie to vanquish a fire monster created by the Create in a battle scene for one of Tomoyo's videos. However, the Nothing soon captures Watery and it plays no further part in the movie.

Watery, like the other Sakura Cards, turned "clear" (blank) and are rendered powerless.

It is later revealed that the Cards were with Syaoran, who knew that Sakura's magical powers had grown enormously and that this could be detrimental to her. The Cards, moved by their love for Sakura and their desire to protect her, left with Syaoran through a spell arranged by his mother to prevent Sakura's powers from developing further and going increasingly chaotic, while creating the Clear Cards.

Watery appeared somewhat shapeless at first, taking the form of large torrents and even a serpentine shape made of water. Her true form was not revealed until shortly before her capture.

Watery resembles a blue, adolescent mermaid with webbed, elven ears, and two wing-like fins, much like a flying fish, on her back. Her hair is parted in the middle with several strands emanating from the top. A scaly circlet decorates her forehead.

As a Sakura Card in the manga, Watery receives two star earrings and a collar resembling her circlet.

In the Clear Card Arc, while under Syaoran's command, her star earrings are replaced with crescent moons.

As an attack card, Watery is noted as being extremely aggressive and violent, even attempting to drown Sakura and her friends, as well as others before she was resealed.

Water Magic: Watery is able to control water and create whirlpools and tidal waves. It also once created a serpentine body of water. It can also absorb the power from other water-based Clow Cards like the Rain card.

Kero: "You choose your allies well, Sakura." Watery: "Indeed. I am forever yours to command."

Watery and Windy against Fiery

The Watery spirit frozen.
Add a photo to this gallery 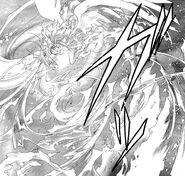 Watery's transformation in the manga

Retrieved from "https://ccsakura.fandom.com/wiki/The_Watery?oldid=56528"
Community content is available under CC-BY-SA unless otherwise noted.