Start a Wiki
Tomoeda has all three levels of school: elementary, middle and high school. All three have various uniforms for different classes and seasons. From Spring to Winter, outdoor P.E to ice skating; Tomoeda's schools have a uniform for any weather and any activity.

The main Tomoeda Elementary School uniform consists of a charcoal-black, long sleeved sweater with white and red striped cuffs. A white sailor-cape with a red stripe is worn over the shoulders with a white tie. The sailor-cape is split in the back, similar to coattails. The white neck-tie also has a red stripe across the bottom of it, just as the sleeve-cuffs do. A black turtle-neck is worn under the top. The Tomoeda Elementary emblem is displayed on the left shoulder.

The bottom half consists of a simple white, short pleated skirt. A pair of white ankle socks and black Mary-janes are worn on the feet.

A white sailor-cap, with black v-cut ribbon is sometimes worn.

Very similar to the female uniform; the male winter uniform has the same top, excluding the black turtle neck. Two red chevrons are embroidered on the left breast of the top. A pocket lines either side of the black top, near the student's hips.

For the bottom half, male students wear a pair of black Capri-pants.

On the feet are a pair of white ankle socks and black loafers.

A white sailor-cap, with black v-cut ribbon is sometimes worn.

It looks like a Buster Brown Suit as the shoes of the girls uniform are Mary-janes from the same comic Buster Brown in 1902.

The Tomoeda Elementary school winter P.E uniforms are unisex in that there are virtually no differences between the male and female versions.

The uniform consists of a white, long-sleeved sweater with to Tomoeda Elementary School's emblem on the left breast. The only difference between the male and female versions being that the female's sweater is slightly shorter; showing the high-waisted pants.

The pants are made of a loose, navy blue material. A pair of white athletic-boots are worn on the feet.

The Tomoeda emblem is displayed on the left breast. 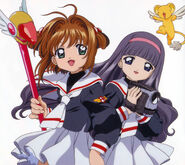 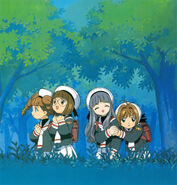 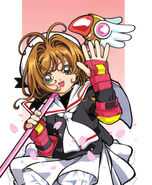 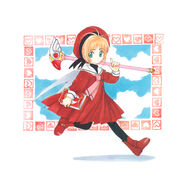 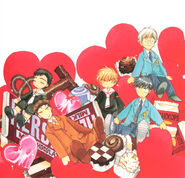 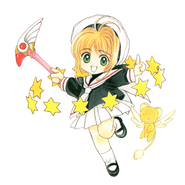 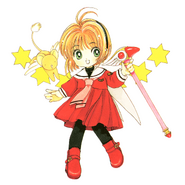 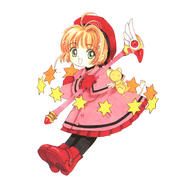 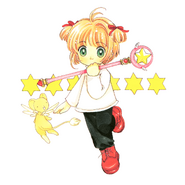 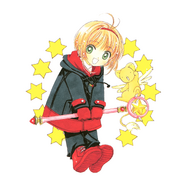 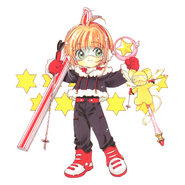 The Tomoeda Elementary School summer uniform consists of a white, short-sleeved blouse. The blouse has slightly puffed-sleeves with a black-stripped rim. A white sailor-collar with a black stripe is worn over the shoulders with a dark red tie. The tide also has a black accent-strip.

In place of the white-pleated winter uniform skirt is a black-pleated skirt.

A pair of white ankle-socks and black Mary-janes are still worn on the feet.

The white sailor-cap is optional.

The female's uniform has spandex-like shorts; where as the males of basketball shorts.

Summer uniforms in a magazine spread. 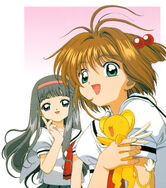 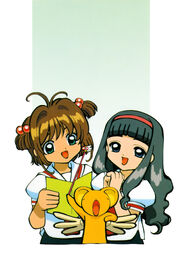 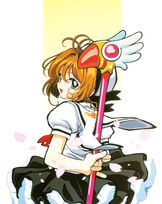 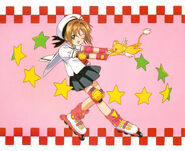 Extra P.E. Settei
Add a photo to this gallery 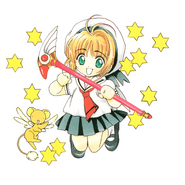 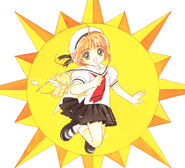 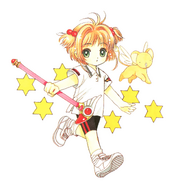 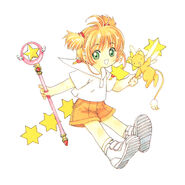 Both male and female students have a school swimsuit.

The female swimsuit is a navy-blue one-piece with the Tomoeda Elementary school emblem on the chest.

The male's swimwear is a pair of short, navy-blue swim-trunks with the Tomoeda Elementary school emblem on the right leg.

This is the uniform Sakura and other female students wear when they are practising their Drills. It is a simple, white Polo shirt, red and white, pleated skirt with white trainers and socks.

This is the uniform Sakura and other female students wear when they are cheer-leading. 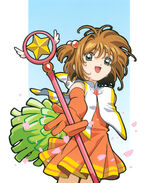 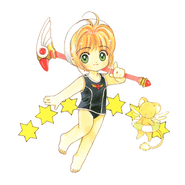 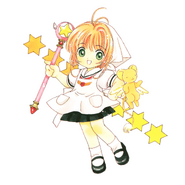 Retrieved from "https://ccsakura.fandom.com/wiki/Tomoeda_Elementary_School_Uniforms?oldid=49590"
Community content is available under CC-BY-SA unless otherwise noted.